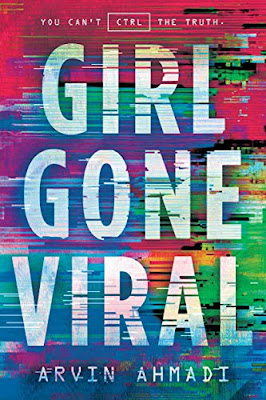 Perfect for fans of Warcross and Black Mirror, Girl Gone Viral is the inventive and timely story of a seventeen-year-old coder's catapult to stardom.For seventeen-year-old Opal Hopper, code is magic. She builds entire worlds from scratch: Mars craters, shimmering lakes, any virtual experience her heart desires.But she can't code her dad back into her life. When he disappeared after her tenth birthday, leaving only a cryptic note, Opal tried desperately to find him. And when he never turned up, she enrolled at a boarding school for technical prodigies and tried to forget.Until now. Because WAVE, the world's biggest virtual reality platform, has announced a contest where the winner gets to meet its billionaire founder. The same billionaire who worked closely with Opal's dad. The one she always believed might know where he went. The one who maybe even murdered him.What begins as a small data hack to win the contest spirals out of control when Opal goes viral, digging her deeper into a hole of lies, hacks, and manipulation. How far will Opal go for the answers--or is it the attention--she's wanted for years?

Dmitry Glukhovsky’s METRO novels have already sold millions of copies in 37 languages. They have also become a basis of cult video games ‘Metro 2033’ and ‘Metro Last Light’, and the film rights were optioned by a Hollywood studio.

Behind the tense plot and the dark ambience of Metro 2035, there’s yet another level: that of social dystopia and political satire. Metro metaphorically paints a pitiless picture of today’s Russia, that is being overcast again by the dark shadows of its gruesome past. Do Russians need freedom? Do they want a war? Can they survive without an enemy? Who’s to blame and can anything be done about it? Eternal questions. Fresh answers. 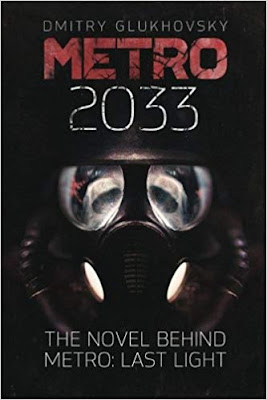 The novel that gave birth to the video games 'Metro 2033' and 'Metro: Last Light' The breathtaking original story that inspired both the METRO 2033 and METRO: LAST LIGHT video games! An international bestseller, translated into 35 languages. Set in the shattered subway of a post apocalyptic Moscow, Metro 2033 is a story of intensive underground survival where the fate of mankind rests in your hands. In 2013 the world was devastated by an apocalyptic event, annihilating almost all mankind and turning the earth’s surface into a poisonous wasteland. A handful of survivors took refuge in the depths of the Moscow underground, and human civilization entered a new Dark Age. The year is 2033. An entire generation has been born and raised underground, and their besieged Metro Station-Cities struggle for survival, with each other, and the mutant horrors that await outside. Artyom was born in the last days before the fire. Having never ventured beyond his Metro Station-City limits, one fateful event sparks a desperate mission to the heart of the Metro system, to warn the remnants of mankind of a terrible impending threat. His journey takes him from the forgotten catacombs beneath the subway to the desolate wastelands above, where his actions will determine the fate of mankind. BURIED. ALIVE. It is now two decades since the planet was convulsed by the Final War, which flashed across the continents, engulfing all of them in an instant, to close the final chapter in our history. Deployed in this war, the most advanced inventions and greatest discoveries of the human genius drove the human race back into caves, submerging civilization forever in the impenetrable gloom of a final Dark Age. Nowadays, in the year 2033, no one can recall any longer what triggered the hostilities. Absurd. But if you think for a moment, what does it matter who started it? Those who unleashed the war were the first to die… And the inheritance they left to us was a smoldering ember that used to be called the Earth. The entire world lies in ruins. The human race has been almost completely exterminated. Even cities that were not totally demolished were rendered unfit to live in by the radiation. And the rumors say that beyond the city limits lie boundless expanses of scorched desert and dense thickets of mutated forest. But what really is there, no one knows. The airwaves are empty, and when the few radio operators who are left tune in for the millionth time to the frequencies on which New York, Paris, Tokyo and Buenos Aires once used to broadcast, all they hear is a dismal howl. More than twenty years have passed since the day when the final plane took off. Railroad tracks, corroded and pitted with rust, now lead nowhere. The great construction projects of the age were transformed into ruins without ever being completed and the skyscrapers of Chicago and Frankfurt were reduced to rubble. The historic districts of Rome lie smothered in moss and fungus, the Eiffel Tower, gnawed through by reddish-brown leprosy, has snapped in half. And the weeds of fiction and fantasy are flourishing on the memory of humankind’s former glory. It is only twenty years since the war ended before it had even begun. But in those twenty years the world has changed beyond all recognition. The planet has new masters now, and the human race is condemned to huddle in burrows, consoling itself with memories. The radiation and viruses with which some human beings attempted to eradicate others have brought new creatures into the world. And now they rule by right over the desolate Earth. The mutants are far better adapted to this new world than human beings. The human era is almost over. There are not many of us left, only a few tens of thousands, out of seven billion human beings. We don’t know if there were others who survived in some other place, on the other side of the world, or if we are the last humans on the planet. We live in the Moscow Metro. 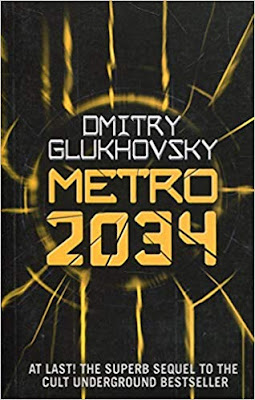 The long-awaited sequel to the cult bestseller Metro 2033, the second volume in the Metro trilogy, Metro 2034 continues the story of survival and struggle that unfolds in the mazes of the Moscow subway after WWIII. As the entire civilization was wiped out by atomic bombs and the surface of the planet is polluted with neclear fallout, the only place suitable for men to live are shelters and bunkers, the largest of which is the subway system of Moscow, aka the Metro. The year is 2034. There's no hope for humans to return to the surface of Earth, to repopulate the forsaken cities, and to become once again the masters of the world they used to be. So they rebuild a strange and grotesque civilization in the tunnels and at the stations of the subway. Stations become city-states that wage trade and war on each other. A fragile equilibrium is established. And then all can be ruined in matter of days. A new horrible threat looms that can eradicate the remains of humanity and end our era. It would take three unlikely heroes to face this menace. The basis of two bestselling computer games Metro 2033 and Metro Last Light, the Metro books have put Dmitry Glukhovsky in the vanguard of Russian speculative fiction. Metro 2034 tells a previously unknown part of the greater Metro saga that some only know from video games. Whether you're new to this series, are a fan of the first novel, or want to explore the world of Metro in depth, Metro 2034 is a perfect read for you! Featuring blistering action, vivid and tough characters, claustrophobic tension and dark satire the Metro books have become bestsellers across the world. 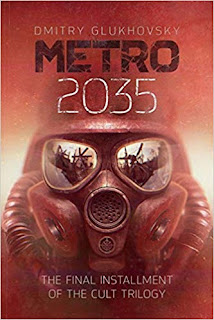 METRO 2035 continues and terminates the story of Artyom, the hero of the original Metro 2033 book and the Metro video games. Millions of readers across the world have been waiting for this novel for the long ten years. For those who have been following Artyom’s adventures from the very beginning, Metro 2035 will deliver the concluding powerful part of the saga, with the ultimate part of the puzzle that can’t be found anywhere else. For the new readers, Metro 2035 will become an excellent introduction into this unique fiction universe that has millions of fans across the world.
at March 06, 2020 No comments: The remarkable, acclaimed series of interconnected detective novels – from the author of 4 3 2 1: A Novel The New York Review of Books has called Paul Auster's work “one of the most distinctive niches in contemporary literature.” Moving at the breathless pace of a thriller, this uniquely stylized triology of detective novels begins with City of Glass, in which Quinn, a mystery writer, receives an ominous phone call in the middle of the night. He’s drawn into the streets of New York, onto an elusive case that’s more puzzling and more deeply-layered than anything he might have written himself. In Ghosts, Blue, a mentee of Brown, is hired by White to spy on Black from a window on Orange Street. Once Blue starts stalking Black, he finds his subject on a similar mission, as well. In The Locked Room, Fanshawe has disappeared, leaving behind his wife and baby and nothing but a cache of novels, plays, and poems.
at March 05, 2020 No comments: